The camera loves Eva Longoria, and vice versa, with the Texas-born actor, producer, director and activist filling her social media feeds with a steady stream of snaps that document her life as a Hollywood mom and mogul.

But a closer look at those Twitter and Instagram posts, and the pop-culture media coverage that invariably follows her around the world, reveals much more than exotic locations, charity galas and celebrity friends. 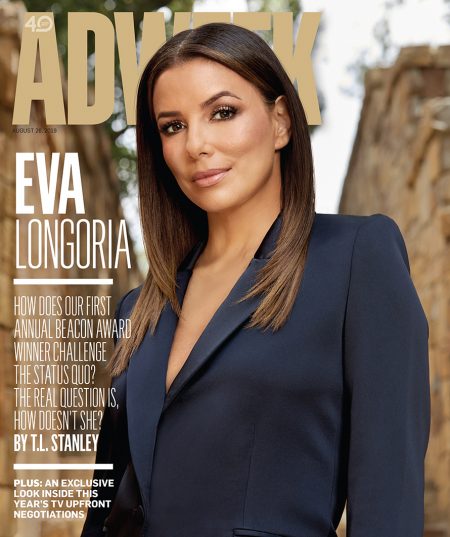 Check out, for instance, the now-viral picture of Longoria directing an episode of Grand Hotel, a midseason drama she’s executive producing for ABC. A few months postpartum, she’s breastfeeding her infant son, Santiago, while marshaling the troops for an action-heavy scene of the nighttime soap.

“I wasn’t making a statement by breastfeeding on set,” she says. But by sharing the candid image, “I hoped to normalize” the blend of career and motherhood and celebrate women everywhere who routinely juggle both.

The photo came on the heels of using baby Santi’s birth announcement (and his first released photo) as a statement about the Trump administration’s child-separation policy at the Mexican border. “Having my son next to me, I can’t imagine him being taken from my arms,” she wrote to her 20 million social followers. “Families belong together, which is why we must do what we can to reunite them.”

“I knew there would be a lot of eyeballs on that first picture,” she says, as her longtime makeup and hair team prepped her for Adweek’s cover shoot in the hills above Studio City, Calif. “I didn’t want to miss an opportunity to do something good with it.”

Yet another case in point: Longoria held her 40th birthday party a few years ago at Morgan’s Wonderland in San Antonio, an amusement park designed for people with special needs. Her 250 guests, including entertainment A-listers, rode the Ferris wheel and went on scavenger hunts, paired with special-needs team members. The weekend unleashed a flood of media around the event and donations to the one-of-a-kind venue.

“I have a special-needs sister, and I wanted to bring attention to the park,” she says. “I knew there would be all this focus on my turning 40, so that’s how I used it.”

These highly ’grammable moments are by no means isolated examples, according to her friend and former talent agent at CAA, Christy Haubegger, now chief inclusion officer at WarnerMedia, who dubbed Longoria “subversive in the best way.” 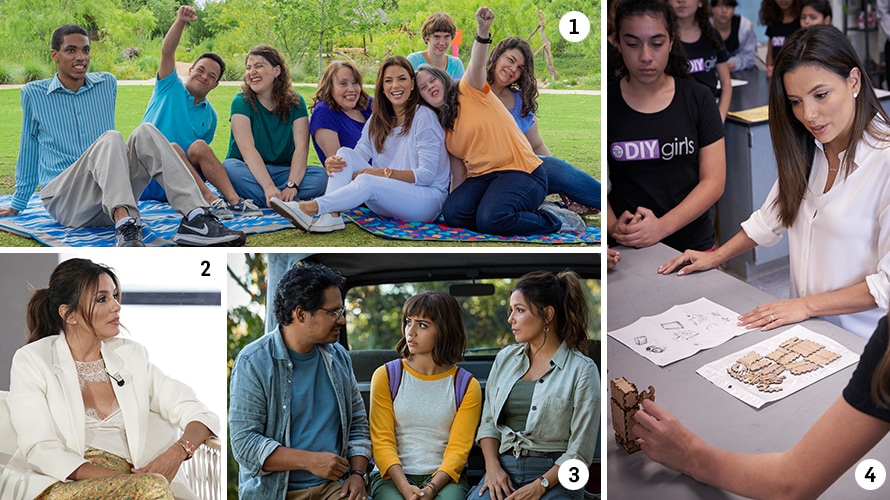 1) Longoria co-founded Eva’s Heroes, a nonprofit providing after-school programs for youngsters with developmental disabilities. 2) At Cannes 2019, the Time’s Up co-founder spoke about ways the organization can empower women voters in 2020. 3) “It’s so exciting to see that the first Latino superhero is a little girl,” says Longoria, pictured with Dora co-stars Michael Peña and Isabela Moner. 4) The Eva Longoria Foundation boosts STEM education for young Latinas, educates parents to support their daughters’ school careers, awards college scholarships to Latinas, and more.

“She’s never considered living a life that wasn’t impactful,” Haubegger says. “That’s how she’ll measure herself. Not, ‘Did I win awards?’ or ‘Did I make a lot of money?’ But, ‘Did I have a positive impact?’ There’s her work, and there’s her life’s work.”

Those two areas are increasingly and deliberately overlapping these days, as Longoria, an original co-founder of Time’s Up and longtime L’Oréal Paris spokeswoman, cultivates her creative side (multiple projects in the works with diverse casts and crews from production company UnbeliEVAble), her philanthropy ($2 million in micro loans awarded to Latinx startups, one of her numerous causes) and her decades of activism (mobilizing Latino voters, stumping for Democratic candidates and girding for 2020). This whirlwind of activity and initiatives inspired Adweek to make Longoria the first recipient of our Beacon Award, which she will receive on Sept. 8 at Adcolor’s 13th annual awards event in Los Angeles.

As we went to press with this issue, she was making news yet again with her activism. Reacting to recent ICE raids and the El Paso mass shooting, Longoria joined with more than 150 entertainers, business leaders and human rights advocates in writing an open letter to the Latino community, published in The New York Times, La Opinion and other newspapers. “If you are feeling terrified, heartbroken and defeated by the barrage of attacks on our community, you are not alone,” it read. “But we will not be broken. We will not be silenced. We will continue to denounce any hateful and inhumane treatment of our community. We will demand dignity and justice.”