Starting today, customers can shop Scout by Warby Parker and buy either a six-day trial pack for $5 with a prescription or a 90-day pack for $110. Additionally, Warby Parker is selling other contact lens brands, such as Acuvue and Alcon. Dave Gilboa, co-founder and co-CEO of Warby Parker, said the brand was thinking about the new category launch “for several years.”

“We wanted to make [the contact journey] as easy as possible and make it [with] less friction and create a holistic experience for all of [our customers’] eye journeys,” Gilboa said.

According to Warby Parker, Scout took 18 months to develop, uses Centraform technology to reduce the feeling of the lens in the eye and comes in 80% less packaging than traditional contact lens brands use.

The lens itself arrives flat-up, making it easier to pick up and drop directly into the eye ,and can easily be returned with no questions asked. While Warby Parker, which started in 2010, said the brand has been thinking about contact lenses for years, it was customer feedback that led to the new product.

“We always start with our customers and think about problems we can solve for our customers,” Gilboa said. “We recognize that 40% of our customers wear contacts regularly, and this would be an opportunity to introduce a great product and build on the brand and distribution points we created for glasses. We think this is an opportunity to bring new innovation to a space and leverage what we already built.” 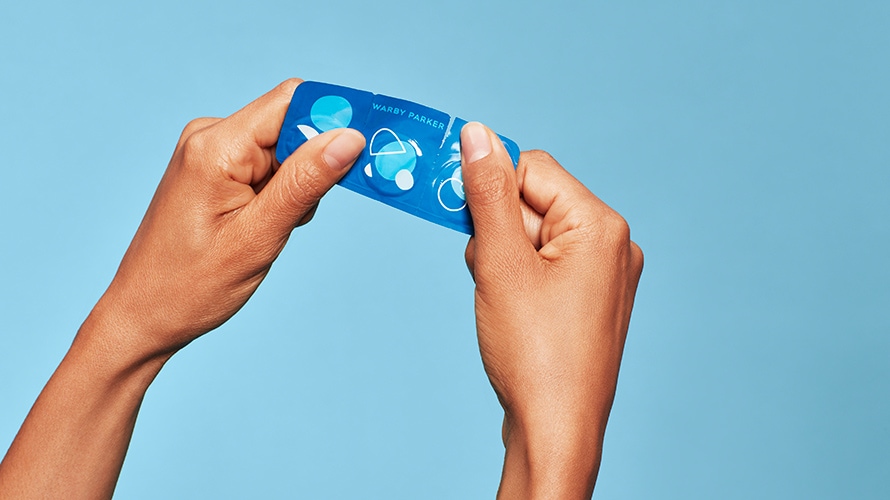 Warby Parker, which has opened up 112 stores across the country with more slated to open before the year’s end, has invested in eye exam offices with optometrists and has about 80 in its stores. So, while customers can still go to their eye doctor to get a prescription, they can also go to a Warby Parker store and test it out. The brand expects to be treated as an out-of-network provider for insurance companies.

“We’re just really excited to offer a holistic vision care offering; consumers can now come to us for contacts.”

Scout arrives a few months after The New York Times reported that DTC contact lens brand Hubble was facing criticism for improperly vetting prescriptions. Warby Parker has taken steps, like selling brands other than Scout, to ensure it won’t face similar critiques. As part of verifying prescriptions, customers need to pick their doctor’s name from a an existing database. The brand has also created a portal for doctors to approve, reject or add more information about their patient before their contact lens request is approved. Gilboa added that while the Warby Parker customer experience team is “very familiar” with calling eye doctors for glasses prescriptions, the brand is staffing up to ensure the contact lens category goes just as smoothly.

“We don’t want to force anyone to switch to Scout,” Gilboa said. “From the regulatory side, we are taking many steps to ensure we’re complying with the contact lens rule and other aspects of optical regulations on both the state and federal level.”

While Warby Parker’s new entry into the category makes it sound like it’s becoming a holding company, Gilboa said that’s not the case and that Scout is simply a solution for its customers. Gilboa said Warby Parker has no plans to become public anytime soon, despite rumors to that effect in 2018 after it raised $75 million in Series E funding, valuing the company at $1.75 billion.

“We’re profitable, we’re in control of our own destiny, we’re likely on that path some point but nothing in the near term,” Gilboa said. “We’re just really excited to offer a holistic vision care offering. Consumers can now come to us for contacts.”