Threads From Instagram Is Facebook’s Latest Volley Against Snapchat – Adweek

A “camera-first messaging application that helps you stay connected to your close friends” may seem to describe Snapchat, but instead, it is how Facebook described its latest shot across Snapchat’s bow, new messaging app Threads From Instagram, which will begin rolling out globally Thursday for iOS and Android.

Instagram director of product Robby Stein said in a Newsroom post introducing the app, “Threads is a standalone app designed with privacy, speed and your close connections in mind. You can share photos, videos, messages, Stories and more with your Instagram Close Friends list. You are in control of who can reach you on Threads, and you can customize the experience around the people who matter most.”

Instagram introduced its Close Friends feature last November as a way for people to share their Stories solely with their customized lists, and Threads incorporates Close Friends by giving users a dedicated inbox and notifications for people included on that list.

Users who have not yet created Close Friends lists on Instagram can do so directly via the Threads app. 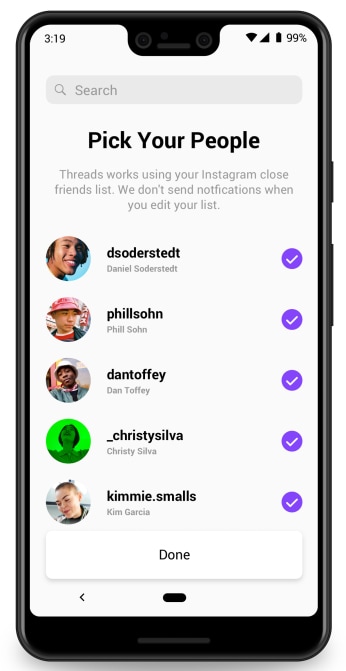 No one can see Close Friends lists, nor can anyone request to be added to them, and notifications are not sent when people are added to or removed from those lists.

The Threads app does not contain a pending inbox with message requests, so only people on users’ Close Friends lists can contact them via the new app.

Much like Snapchat, Threads opens directly to the camera, enabling users to quickly share photos or videos, and they also have the ability to create shortcuts.

Threads’ defining feature is status, which enables people to keep up with each other without having to share photos, videos or text.

People can choose from suggested status updates, create their own or turn on an auto-status feature which automatically shares context on where they are without revealing their exact location.

Newton provided more details on status in her Newsroom post: “If you turn it on, auto-status is informed by your device, like the charging state of your phone, ‘low battery,’ or from location services, which you’ll need to allow in your phone settings. Turning on location services is required for auto-status to identify and share the general category of the place you’re at, like, ‘at the beach,’ ‘on the move’ or ‘at home.’ For example, the auto-status, ‘at a café,’ is set when you’re at a coffee shop, but it won’t share the name of the cafe or the address. Auto-status is completely opt-in, and you can change or turn it off at any time.”

Stein told Josh Constine of TechCrunch that battery status was included so that people could let friends know they are charging their phone and may not be near it, or their battery is dying and they may not be able to reply.

Newton further clarified that enabling auto-status means Threads will request location, movement, battery level and network connection from a user’s phone in order to determine what information to share, and users will be told what information auto-status is requesting and asked to specifically agree.

Precise locations are not shared with friends, and Newton said that when Threads sends location information to Facebook’s servers to look up locations, that information is not stored. It is only kept on the user’s device for a limited time, and if Threads is removed from that device, the data is deleted, as well.