Spray Tanned and Stilettoed, First BravoCon Was a Hit – Adweek

At a special taping of Watch What Happens Live in L.A. last spring, the screaming hordes of fans convinced the network’s top leadership that there would be demand for a ticketed three-day conference of panel discussions featuring Bravo talent. Moreover, people might even spend more on intimate events featuring their favorite cast members.

When three-day passes to BravoCon went on sale, they sold out within 60 seconds. In Bravo time, that’s an eternity. It’s enough time for Teresa Giudice to flip a table or for James Kennedy and Lala Kent to yell about pasta. But in a world already crowded with media companies looking to get into the event space, the success of the first BravoCon, which took place Nov. 15-17 in New York, represents a new foray into experiential for NBCUniversal.

“We recognize in today’s world, having the opportunity to transcend screens to bring consumers experiential and bring our marketers into this is a really unbelievable opportunity for all of us,” said Laura Molen, president of advertising sales and partnerships at NBCUniversal. “We’re doing this. And we’ve been testing it—and it is working, so you’ll see more.”

The weekend was jam-packed with unprecedented access to Bravo celebrities—or Bravolebrities—including Bravo’s largest-ever episode of Watch What Happens Live with over 75 cast members. Unlike its usually scheduled live airtime, the show was recorded on Friday and shown on Sunday. 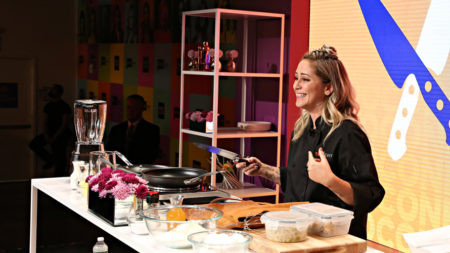 Demonstrations throughout the weekend included those from Top Chef.

Cast members from Bravo franchises like Top Chef did food demos, Vanderpump Rules bartenders made cocktails with recipes from their new book, and nearly all of them appeared on a Pepsi-branded stage to take the spotlight and elaborate more on what’s going on in their lives offscreen.

“We knew this event needed to be authentic [and] immersive as well—the full Bravo experience,” said Maria Laino Deluca, svp of consumer and social marketing at Bravo and Universal Kids.

The event came together post-upfront negotiations, Molen said, quickly signing on Pepsi as a presenting partner and advertisers like State Farm, Unilever and Pure Leaf.

The brands sponsored many of the add-on events, like a Vanderpump Rules afterparty (brought to you by Pepsi, which created a custom non-alcoholic sparkling rosé for the occasion), and a brunch from Southern Charm castmates sponsored by Hotels.com, a new brand partner for the network, which gave each attendee a branded bathrobe to take home.

Pepsi thought about brainstorming what would make for a meaningful way to engage with a Bravo fan that wasn’t just “slapping our logo” on something, said Todd Kaplan, vice president of marketing for Pepsi.

“These are the superfans,” Kaplan said. “We wanted to do something that adds to the experience and shows these fans that we know and appreciate what they like and to be a part of it in a more deep and engaging way.”

The event was years in the making for Bravo, which had been debating holding a festival for fans after seeing success with getting its franchises into the experiential space, like when it held a bar crawl through New York with talent from its Vanderpump Rules series.

“Experiential is really having a moment”

“Experiential is really having a moment,” Deluca said.

BravoCon also marked a new record for the network in terms of arranging travel and accommodations for its talent, who traveled to the event from all over the country. Once in New York, they were taken to several locations throughout Manhattan, including a Bravo pop-up museum and Instagram sets like a miniature WWHL clubhouse where you could pose and pretend you were about to be grilled by host Andy Cohen and at a swing set modeled after the one Lisa Vanderpump, of Real Housewives of Beverly Hills, has in her backyard.