Snap Took the Wraps off Spectacles 3, the Third Version of Its Camera Sunglasses – Adweek

Snap Inc. will ship the third edition of its Spectacles camera sunglasses this fall, saying that Spectacles 3 will be a “limited-edition” product, with a production run of “only a fraction” of the over 200,000 units it sold of its original Spectacles.

While the production volume may be down, the suggested retail price is heading in the opposite direction. The first-edition Spectacles sold for $129.99, and the second generation was bumped up slightly, to $149.99. Spectacles 3 is available for preorder via Spectacles.com for a hefty $380. 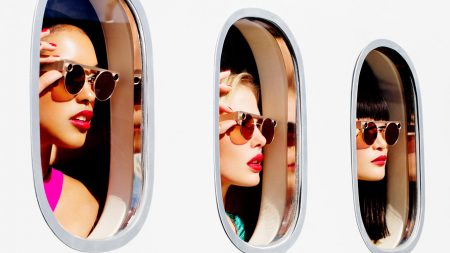 The “3” in Spectacles 3 represents the version number, but it could also stand for 3D, as the device’s dual HD camera were designed to capture depth and dimension the same way the human eye does, adding depth and helping power new 3D effects on the Snapchat messaging application, as well as enabling augmented reality assets to interact with real-world objects.

The company said Snaps captured using Spectacles 3 seamlessly transfer, in HD, to the app’s Memories section, where users can add lighting, landscapes and other effects.

Those Snaps can also be exported to people’s camera rolls in circular, horizontal, square and virtual reality formats for saving, editing, sharing and viewing again.

The glasses themselves feature a strong, lightweight steel frame, with circular lenses and adjustable acetate tips, and they are available in two color options: carbon (monochromatic black with a semi-matte finish and high-gloss details) and mineral (Snap described it as “a tone inspired by cosmetic hues with a hint-of-gold frame”). 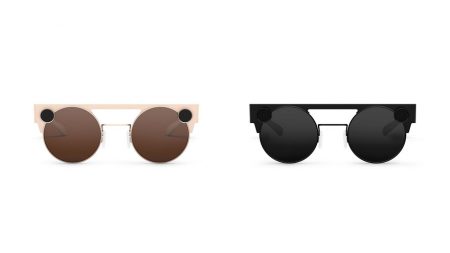 The full-grain-leather charging case can store up to four charges, and it comes with a standard certified USB-C charging cable. Spectacles 3 also includes a 3D viewer.

Spectacles were introduced in September 2016, with the company simultaneously announcing its name change to Snap Inc.

The camera-sunglasses were available at first in November 2016 only via Snapbots, vending machines that appeared in select locations for just a day at a time. They were made available for purchase via Spectacles.com in February 2017, but only in the U.S. And they made their European debut in June 2017 via both the vending machines and the website.

However, despite all of the hype, Snap sold just 220,000 first-generation Spectacles, and the company recorded a $39.9 million nonrecurring expense in the third quarter of 2017 due to “excess inventory and purchase commitment cancellations.”

The second-generation Spectacles, which rolled out in April 2018, added the ability to capture photos (the first release only captured videos), quicker transfer of HD content via Wi-Fi, water-resistant construction, a sleeker frame and more options for frame colors and lens shades.