On and Off the Field, Alex Morgan and Her USWNT Teammates ‘Will Not Be Silenced’ – Adweek

Moments after her team won its second consecutive FIFA Women’s World Cup on Sunday, Alex Morgan kissed the 18-carat gold and malachite trophy and raised it high over her head as confetti rained down on the capacity crowd at Stade de France.

Seconds later she was laying flat on the pitch, joyfully making snow angels out of all those colorful fallen streamers.

Team USA beat the Netherlands 2-0 on Sunday to log the fourth championship for the U.S. Women’s National Team (USWNT), the most for any country. Morgan, who scored a record-busting five goals in a single game (against Thailand on June 11), spoke to Fox Sports commentator Alex Curry as the victory celebration continued on field.

“This team is something special,” she said, wearing the freshly made Nike jersey with Champions 19 emblazoned across the shoulders. “To do it back to back is pretty incredible. I feel like we had a hard route to the finals and the Netherlands played extremely well. Eventually, we overcame, and I’m just proud of this team.”

Morgan, who scored her 6th tournament goal on her 30th birthday in the semi-final game against England and was in line to take the Golden Boot (that prize went to teammate and co-captain Megan Rapinoe), said the Americans “felt confident” headed into the month-long, grueling contest: “I give credit to this team for keeping our heads and playing our roles to a T.”

She was close to scoring several times in the final game and nearly injured taking a “high boot” kick that resulted in a crucial penalty against the Netherlands.

Television viewing skyrocketed, and praise poured in for the American women, with social media lighting up in the game’s aftermath with messages from celebrities, athletes and fans, everyone from Hillary Clinton and Sen. Chuck Schumer to Ellen DeGeneres, Tom Brady and Magic Johnson congratulated the winners.

“What this team represents is so special,” she said shortly after the win. “It’s a feeling, it’s a movement, it’s about strong women who chase their dreams, who are unapologetic in what they want and what they believe in. They get it done on the field. They’re just such an inspiration for young people throughout the U.S. and football fans everywhere.”

“This team is something special. To do it back to back is pretty incredible.”

Fellow broadcaster Rob Stone added his own perspective: “This is a team who talents and matching convictions off the field left you with one clear message: They will not be silenced.”

The contest hasn’t been without its controversy for the American women, from the battle for equal pay, actually begun several years ago, to criticism of “excessive” celebrating for their victories in France.

Going into the tournament, Team USA has been going head-to-head with U.S. Soccer over equal pay, training, travel, medical care and other perks. They’ve built a groundswell of support among fans, and lawmakers have recently joined the cause with 50-plus members of Congress demanding answers from soccer’s governing body.

“The USWNT is the most successful team in women’s soccer history, winning World Cup titles in 1991, 1999 and 2015; winning four Olympic gold medals; and holding the No. 1 ranking entering the 2019 FIFA Women’s World Cup,” reads a Wednesday letter to U.S. Soccer President Carlos Cordeiro. “However, despite doing the same job as the U.S. Men’s National Team, USWNT players are receiving inferior wages, working conditions, and investment from U.S. Soccer.”

Rep. Jackie Speier (D-Calif.) and other leaders in the House Democratic Women’s Caucus signed the letter. 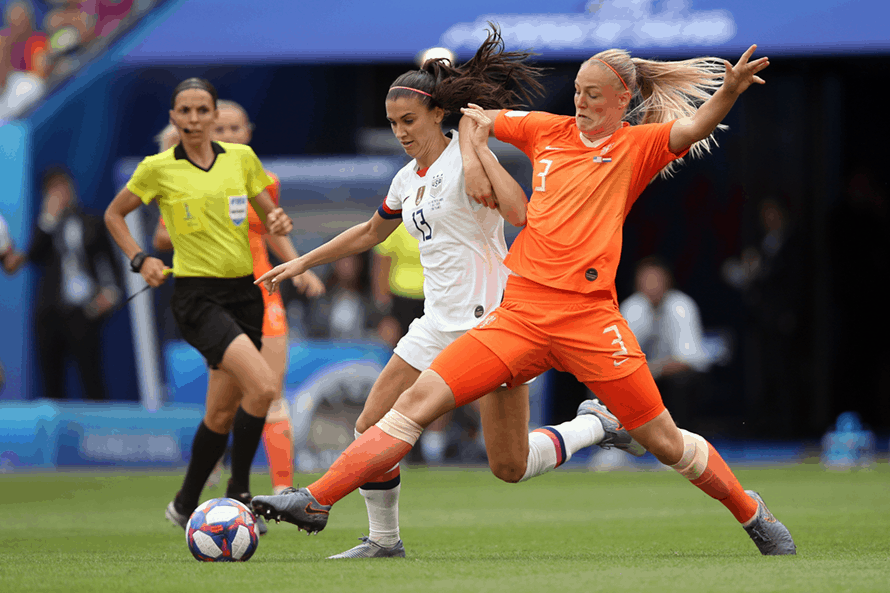 Alex Morgan of USA and Stefanie Van Der Gragt of the Netherlands during the 2019 FIFA Women’s World Cup France Final.

Morgan, whose name is listed first on the lawsuit the team filed against U.S. Soccer on International Women’s Day, has repeatedly said she thinks the team’s case will help women across industries and that the current Time’s Up movement has pushed the issue further to the forefront.

0 0 votes
Article Rating
Share
Facebook
Twitter
Pinterest
WhatsApp
Previous articleWhy Google+ is Shutting down in 2019? | How to Save your Data Explained
Next articleSeo Tutorial | How To Add Your Blog To Google Search Engine | Step By Step