McCann Worldgroup Is 2019 Global Agency of the Year – Adweek

“We screwed up,” admits Harris Diamond, CEO of McCann Worldgroup, sitting in his loftlike New York office in Midtown Manhattan. 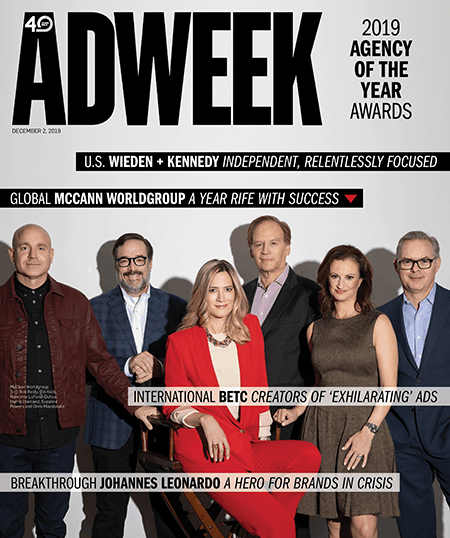 The end of 2018 marked a massive loss for McCann: the U.S. Army, a client it was forced to hand over the reins on after a nearly 15-year run. DDB won the account late last year, officially bringing an end to what had become a yearslong, contentious battle that the Interpublic Group agency tried desperately hard to win—but ultimately didn’t after being eliminated from the review process for failing to submit the correct documentation.

But what Diamond describes as an “emotional loss” has hardly come to define McCann, which is one of the many reasons Adweek has chosen it as Global Agency of the Year for 2019, a title it hasn’t held since 2000. What could have been a major blow ended up being not much more than a lesson learned, a blip on the radar in a year rife with success.

In 2019, McCann racked up industry accolades ranging from Cannes Network of the Year to the Most Creatively Effective Agency Network in the Effie Index, all while churning out work for its impressive roster of clients. The through line in all of this creative output? Whether McCann is shining a light on how Microsoft is innovating for the disabled community, or helping L’Oréal fight ageism via a partnership with Vogue, the agency is one of the best in the business when it comes to giving brands purpose.

McCann Worldgroup grew by approximately 2.5% between November 2018 and September 2019 on a revenue base of approximately $2.4 billion.

Shaking up the C-suite

Talk to any McCann executive and you’ll likely hear them utter the following: “Help brands play a meaningful role in people’s lives.” It might sound like trite corporate lingo, but it’s the rallying cry that the agency’s leadership team says has helped unite its global offices around a common goal.

It took hold five years ago, shortly after McCann began a leadership overhaul that started with the appointment of Diamond, who was tasked with turning around an agency that at the time was struggling because of account losses and a lack of new business. It wasn’t long before Diamond brought on Rob Reilly, former worldwide chief creative officer of CPB, as global creative chairman.

“When I started five years ago, we were trying to figure out the mission of the company,” Reilly says. “I think we hit the right note, and now it’s all lining up together.”

The agency’s global leadership team now includes chief strategy officer Suzanne Powers and president of global clients and business leadership Nannette LaFond-Dufour. It’s this group that’s helped usher in a creative renaissance at McCann, one that they agree is the result of helping brands play a meaningful role in people’s lives and putting a relentless premium on creativity.