Instagram began testing a Restrict feature in July, aimed at enabling people to avoid unwanted interactions with other users, without those users knowing. The Restrict feature began rolling out globally Wednesday.

The Facebook-owned photo- and video-sharing network said the Restrict feature was designed to help empower users to protect their accounts and experience on the platform, while still keeping an eye on someone who might be bullying them or taking other inappropriate actions.

Once a person is restricted, they will be the only person able to see their comments on posts by the user who restricted them.

People who have restricted users can choose to view their comments by tapping “See Comment,” at which point they can approve the comment so everyone can see it, delete it, or ignore it. Notifications will not be sent for comments from restricted accounts.

As for Instagram Direct, messages from restricted users will automatically be moved to the Message Request tab, and notifications will not be sent. Those messages can still be viewed by the recipient, but the sender will not be able to see when the messages are read or if the recipient is active on Instagram.

The account can also be unrestricted, at which point future messages will go directly into the recipient’s inbox.

In other anti-bullying efforts, Instagram recently rolled out a Create Don’t Hate sticker for Stories to help its community share how they use their creative talents to stand up to bullying. 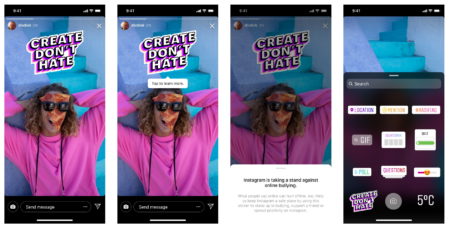 Throughout October, Instagram will use its #Advocates series on its account to share stories of young people who have been bullied and are using its platform to share their stories of activism and turn the negative into a positive.

Finally, last week, Instagram debuted Un-filtered, a four-episode series on its IGTV long-form video destination directed by Jonah Hill and sharing the unscripted stories of four people who got caught up in bullying as either victims or aggressors.