Original series like Star Wars space western The Mandalorian and docuseries The World According to Jeff Goldblum won’t have their entire seasons dumped onto the platform all at once. Only the first episode of those shows was available on the day the platform launched, with new episodes following every Friday thereafter.

Netflix redefined the streaming space back in 2013 when it began releasing original content in binge-friendly, season-length batches. As more streaming services come onto the scene, though, companies are taking varied approaches, determining if different release rhythms keep consumers coming back or can better serve their advertising partners. CBS All Access, which first released original programming in 2016, has opted to take a weekly approach to most of its originals, like Disney+. HBO Max, launching next May, has said it will also release most content on a weekly basis.

CBS All Access’ internal data showed that there wasn’t a significant difference between viewing habits among viewers who watched shows week to week and viewers who binged the entire show, said Marc DeBevoise, president and CEO of CBS Interactive. “There isn’t necessarily an advantage to dropping it all at once versus spreading it out over time,” he said.

In fact, DeBevoise said the weekly releases give CBS a longer window to market shows instead of having to advertise an original series all at once. The arrangement also benefits sponsors “since many advertisers prefer not to hit the same user too many times,” DeBevoise said. About two-thirds of CBS All Access subscribers choose the service’s ad-supported version. 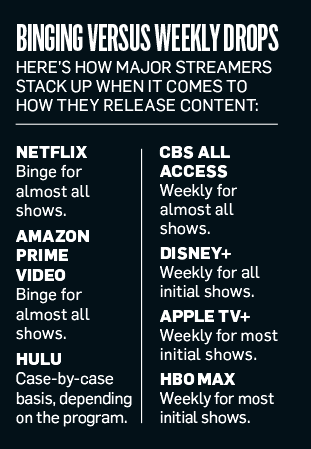 “For SVODs [subscription video on-demand], the episodic or limited release works because you want to show value for that subscription and keep people coming back,” said Boaz, whose agency has worked with streaming services like PeopleTV and BBC’s BritBox. “Ideally, you can stretch the release of shows they like over the first several months, and if you get them to keep their subscription past the first 30 days, you’re golden. The drop-off rates of subscriptions are huge in the first 30 days and trail off as the months go along.”

Netflix recently tried a different approach to releasing its rap competition show Rhythm + Flow by dropping multiple episodes each week over the course of three weeks, but company executives said subscribers prefer watching series all at once instead of weekly. On its recent earnings call, chief content officer Ted Sarandos said that when Netflix releases some shows on a weekly basis in international markets, viewing levels and social media buzz are lower than when seasons drop all at once.

“What we’re trying to do is match not just the program that you want to watch, but how [you] want to watch it,” said Sarandos. “For a lot of people, it may not be all at once, but it’s hardly ever one a week.”

“We make a decision based on what’s best for each show,” Craig Erwich, svp of originals at Hulu, told Adweek earlier this year. “There are some shows that, creatively, are better experienced on a week-to-week basis,” including “intense” dramas like The Handmaid’s Tale where “part of the experience is the digesting [what you just saw].” But when it comes to many of Hulu’s comedies, like Shrill and Ramy, “in general, people love to sit down and just go through them,” Erwich said.