If Ford, Honda or Jeep knew a potential customer stopped at a Burger King on the way home from the dealership, would that help them sell cars? Snapchat thinks so.

A new report released by the messaging app highlights how location data can show the trends and relationships between its users and the auto-buying experience.

The report, published in partnership with the location data company Factual, provides a glimpse into what car buyers—and Snapchat users—are thinking when it comes to purchasing an automobile.

Considering that Snapchat boasts of reaching 90% of all people aged 13 to 24 and 75% of all people aged 13 to 34 in the U.S., the report’s findings are significant, since these age groups make up the largest population of new car registrations at 32.4%, according to consumer reporting agency Experian. (Of course, a big caveat is that 13-year-olds are not buying cars.) 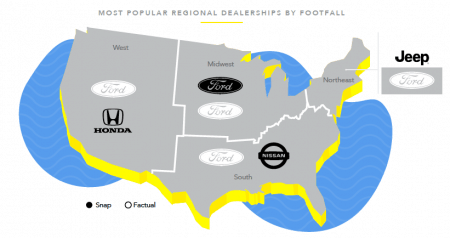 For Snapchat, the location data provides the ability to reach the right people at the right time.

“Foot traffic is one of the strongest identifiers of interest as a potential buyer, especially for the auto industry,” said Ariana Battle, a senior analyst at Snapchat. “When these young demographics come of age and purchase a car, this is a really important stakeholding point for advertisers.”

Simply put, it makes sense why a dealership would want to know when Snapchat users are most likely to visit a dealership. Snapchat says that’s Friday evenings between 5 p.m. to close and Saturday afternoons from 11 a.m. to 5 p.m.

“What we are trying to look at here and show was how auto marketers can use location data to better understand customers and reach potential customers,” said Brian Czarny, Factual’s chief marketing officer. While Snapchat used the location data from its own users, Factual’s data is pulled from mobile devices providing a more general look at car buyers across the country. 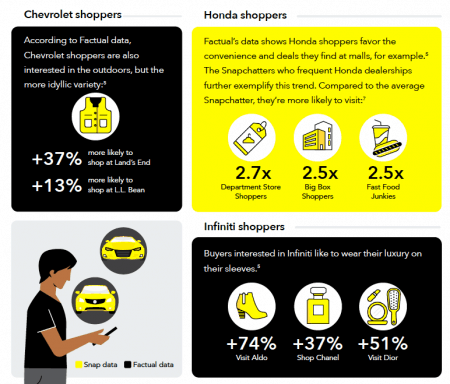 While location data can be relevant, especially with targeted, mobile advertisements, it shouldn’t be the main component of a marketing plan, says Alexander Edwards, the president of Strategic Vision, which publishes a New Vehicle Experience Study every year.

“It knows there’s interest, but it’s not telling me whether that interest is converting to actual sales,” said Edwards. “It’s data—it’s good data—but it’s more interesting than strategic.”

Instead, Edwards points to what he believes are more relevant indicators, like registrations, returning customers and customer priorities.

Of course, sometimes the location data is spot on. According to the report, Ford dealerships saw the most foot traffic between September of 2017 and August of 2018, but among Snapchat users, it lagged regionally, falling behind everywhere but the Midwest.

“If I was Ford, I’d be concerned, because they’re relying on selling to older repeat buyers than going after new, first-time buyers,” said Edwards. “Brands that rely on selling to repeat buyers are like Oldsmobile, who ultimately went out of business.”

As evident in the study, Ford is fine for now, but when young buyers inevitably mature, it may be too late, Edwards said.