Just when marketers thought all hope was lost and that they’d never see big numbers from organic engagement on Facebook again, the app released news that could put them back in the game.

At Facebook’s F8 developer’s conference in April, CEO Mark Zuckerberg introduced a new site and app design, placing private messaging and groups at the heart of the experience. Like many of Facebook’s changes over the years, some marketers yawned while others tried to get ahead of the curveball that could have potentially meant a drop in clicks and engagement.

Unlike the public news feed where a post is shared with all of a user’s friends, groups—of which, Facebook says 400 million people are using—create a private space where members share a common interest, a space where comments and discussions aren’t subject to scrutiny like they would be in the general public news feed.

As Facebook continues to push users to this feature, marketers see their social strategies becoming more fluid, and what worked in the past may not continue to work in the present. This is especially helpful in light of Facebook’s never-ending algorithm changes—one in 2018, when Facebook de-prioritized link posts in favor of videos, and Facebook Live—resulting in a hard hit in reduced engagement. Facebook’s news feed, filled with more and more paid posts, was becoming a pay-to-play space.

With this understanding, Mishka Phillips, strategy lead at agency MediaCom in South Africa, was looking for ways to connect food company Royco South Africa to its audience in a way that wouldn’t break the bank. She turned to Facebook Groups as “the last bastion of organic engagement.” The private group, started last January, has amassed more than half a million followers, harnessing the power of what a group can do for a brand’s engagement on social media.

Phillips said she “never spent a cent on advertising or recruiting for the Facebook group,” but it has grown exponentially and taken on a life of its own, with group members creating games and rating one another’s food picture posts.

“What we’re finding is there’s a different behavior in groups than there is in the news feed,” Phillips said. “Take advantage of this if you have a way of adding real value to your consumer or audience, and be prepared for [the group] to take on a life of its own.” 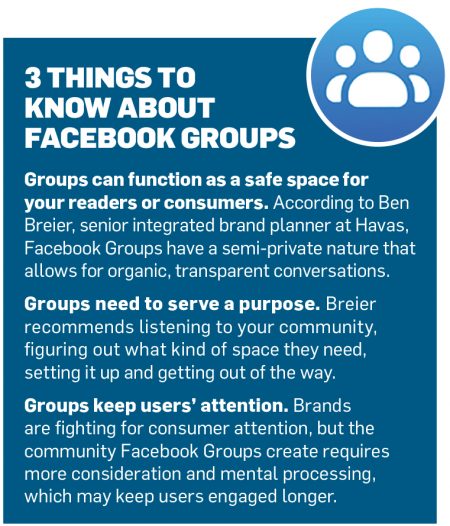 Digital media consultant Greg Baroth, who likes to think he’s ahead of the curve when it comes to social media, took a different approach to Facebook Groups.

Baroth said he was “randomly added” to a private Facebook group for “dudes” where members “post funny shit about adding more dudes (or dude culture).” At the time, Baroth was working with disposable wipe product Dude Wipes. With organic reach on Facebook and Instagram news feeds, working Dude Wipes into the dude-centric Facebook group was quite literally the perfect fit.

“I messaged a few of the [group’s] admins and said, ‘If we donate $500 to the charity of your choice, will you let us advertise from time to time?’” Baroth recalled.

And it worked. The advertised post saw more than 1,000 comments from members of the 285,000-member group, some of whom were interested in the free sample advertised. It sparked organic influence, too, as some shared photos of their samples once they received them.

While groups can bring brands and marketers new ways to succeed, Jonathan Vu, global managing partner at media agency Initiative, said brands need to think critically when it comes to deciding whether or not to create a branded Facebook group.

“A lot of people created pages, thinking if we build it, people will come. And we learned very quickly that some brands don’t have community,” he said. “Consumers just want to use the product.”