How Google May Annotate Images to Improve Search Results

How might Google improve on information from sources such as knowledge bases to help them answer search queries?

That information may be learned from or inferred from sources outside of those knowledge bases when Google may:

A recent Google patent on this topic defines knowledge bases for us, why those are important, and it points out examples of how Google looks at entities while it may annotate images:

A knowledge base is an important repository of structured and unstructured data. The data stored in a knowledge base may include information such as entities, facts about entities, and relationships between entities. This information can be used to assist with or satisfy user search queries processed by a search engine.

The focus of this patent is upon improving upon information that can be found in knowledge bases:

All gathered information may be stored in a knowledge base to enrich the information that is available for processing search queries.

This approach may annotate images and select object entities contained in those images. It reminded me of a post I recently wrote about Google annotating images, How Google May Map Image Queries

This is an effort to better understand and annotate images, and explore related entities in images, so Google can focus on “relationships between the object entities and attribute entities, and store the relationships in a knowledge base.”

Google can learn from images of real-world objects (a phrase they used for entities when they started the Knowledge Graph in 2012.)

I wrote another post about image search becoming more semantic, in the labels they added to categories in Google image search results. I wrote about those in Google Image Search Labels Becoming More Semantic?

When writing about mapping image queries, I couldn’t help but think about labels helping to organize information in a useful way. I’ve suggested using those labels to better learn about entities when creating content or doing keyword research. Doing image searches and looking at those semantic labels can be worth the effort.

In accordance with one exemplary embodiment, a computer-implemented method is provided for enriching a knowledge base for search queries. The method includes assigning annotations to images stored in a database. The annotations may identify entities contained in the images. An object entity among the entities may be selected based on the annotations. At least one attribute entity may be determined using the annotated images containing the object entity. A relationship between the object entity and the at least one attribute entity may be inferred and stored in a knowledge base. 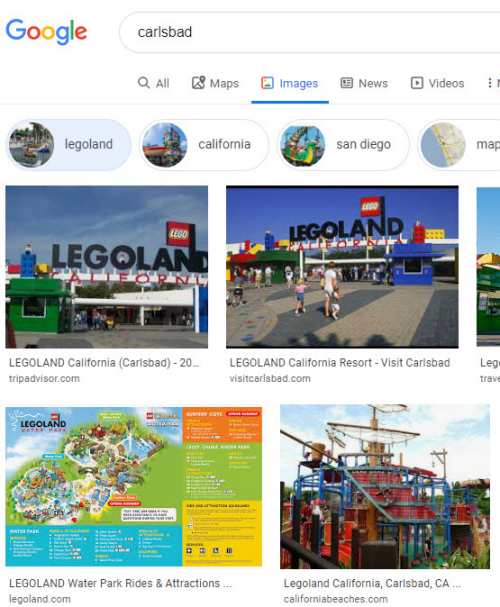 This patent can be found at:

Confidence Scores While Labeling of Entities in Images

One of the first phrases to jump out at me when I scanned this patent to decide that I wanted to write about it was the phrase, “confidence scores,” which reminded me of association scores which I wrote about discussing Google trying to extract information about entities and relationships with other entities and confidence scores about the relationships between those entities, and about attributes involving the entities. I mentioned association scores in the post Entity Extractions for Knowledge Graphs at Google, because those scores were described in the patent Computerized systems and methods for extracting and storing information regarding entities.

I also referred to these confidence scores when I wrote about Answering Questions Using Knowledge Graphs, because association scores or confidence scores can lead to better answers to questions about entities in search results, which is an aim of this patent, and how it attempts to analyze and label images and understand the relationships between entities shown in those images.

The patent lays out the purpose it serves when it may analyze and annotate images like this:

Embodiments of the present disclosure provide improved systems and methods for enriching a knowledge base for search queries. The information used to enrich a knowledge base may be learned or inferred from analyzing images and other data sources.

In accordance with some embodiments, object recognition technology is used to annotate images stored in databases or harvested from Internet web pages. The annotations may identify who and/or what is contained in the images.

The inferred relationships may be stored in a knowledge base and subsequently used to assist with or respond to user search queries processed by a search engine.

If you look back up at the pictures for Legoland above, it may be considered an attribute entity of the Object Entity Carlsbad, because Legoland is located in Carlsbad. The label annotations indicate what the images portray, and infer a relationship between the entities.

Just like an image search for Milan Italy shows a category label for Duomo, a Cathedral located in the City. The Duomo is an attribute entity of the Object Entity of Milan because it is located in Milan Italy. 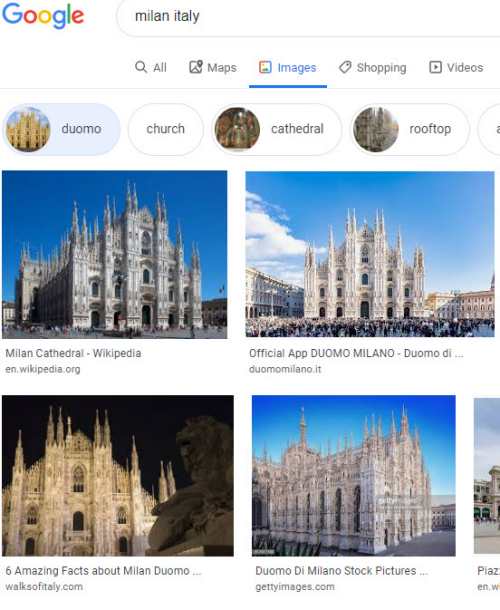 A search engine may learn from label annotations and because of confidence scores about images because the search engine (or indexing engine thereof) may index:

The Illustrations from the patent show us images of a Bear, eating a Fish, to tell us that the Bear is an Object Entity, and the Fish is an Attribute Entity and that Bears eat Fish. 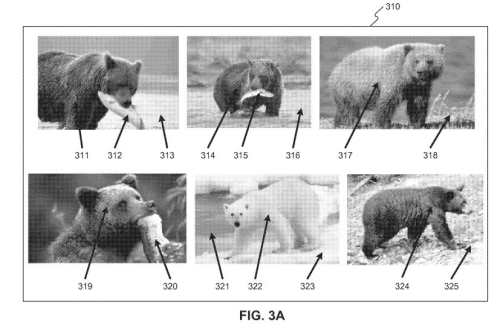 We are also shown that Bears, as object Entities have other Attribute Entities associated with them, since they will go into the water to hunt fish, and roam around on the grass. 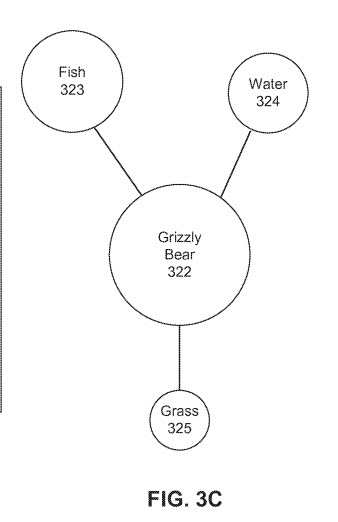 Annotations may be detailed and cover objects within photos or images, like the bear eating the fish above. The patent points out a range of entities that might appear in a single image by telling us about a photo from a baseball game:

An annotation may identify an entity contained in an image. An entity may be a person, place, thing, or concept. For example, an image taken at a baseball game may contain entities such as “baseball fan”, “grass”, “baseball player”, “baseball stadium”, etc.

An entity may also be a specific person, place, thing, or concept. For example, the image taken at the baseball game may contain entities such as “Nationals Park” and “Ryan Zimmerman”.

Defining an Object Entity in an Image

The patent provides more insights into what object entities are and how they might be selected:

A server may select an object entity based on the entity contained in the greatest number of annotated images as identified by the annotations.

For example, a group of 50 images may be assigned annotations that identify George Washington in 30 of those images. Accordingly, a server may select George Washington as the object entity if 30 out of 50 annotated images is the greatest number for any identified entity.

Defining an Attribute Entity in an Image

Annotated images that contain the object entity may be grouped and an attribute entity may be selected based on what entity might be contained in the greatest number of grouped images as identified by the annotations.

So, a group of 30 annotated images containing object entity “George Washington” may also include 20 images that contain “Martha Washington.”

In that case, “Martha Washington,” may be considered an attribute entity

From analyzing images of bears hunting for fish in water, and roaming around on grassy fields, some relationships between bears and fish and water and grass can be made also: 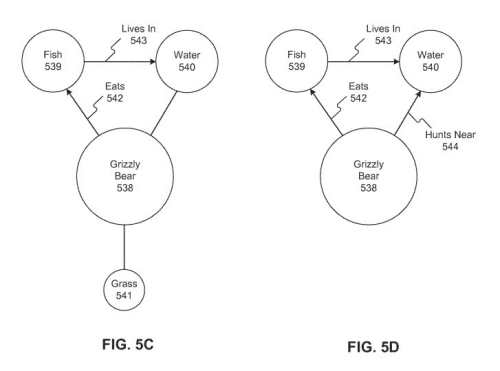 To answer a query such as “What team did Michael Jordan play basketball for, Google could perform an image search for “Michael Jordan playing basketball”. Having those images that contain the object entity of interest can allow the images to be analyzed and an answer provided. See the picture at the top of this post, showing Michael Jordan in a Bulls jersey.

This process to collect and annotate images can be done using any images found on the Web, and isn’t limited to images that might be found in places like Wikipedia.

Google can analyze images online in a way that scales on a web-wide basis, and by analyzing images, it may provide insights that a knowledge graph might not, such as to answer the question, “where do Grizzly Bears hunt?” an analysis of photos reveals that they like to hunt near water so that they can eat fish.

The confidence scores in this patent aren’t like the association scores in the other patents about entities that I wrote about, because they are trying to gauge how likely it is that what is in a photo or image is indeed the entity that it might then be labeled with.

The association scores that I wrote about were trying to gauge how likely relationships between entities and attributes might be more likely to be true based upon things such as the reliability and popularity of the sources of that information.

So, Google is trying to learn about real-world objects (entities) by analyzing pictures of those entities (ones that it has confidence in), as an alternative way of learning about the world and the things within it. 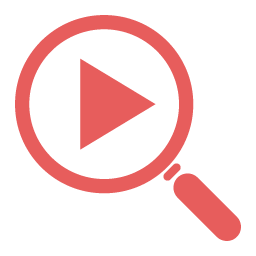 We’re looking for skilled marketers to speak at SMX Advanced!

Why (& How) Topic Clusters Are Your Most Powerful SEO Weapon