How DTC Brands Are Going Green Beyond the Climate Strike – Adweek

More than 4 million people participated in marches around the world during the first Global Climate Strike. Some of those participants included workers from brands that opted to give employees the opportunity to protest inaction by governments—and corporations—against the climate crisis.

Brands such as Patagonia and Ben & Jerry’s led the movement by closing their shops for the day, but direct-to-consumer companies like Allbirds, Outdoor Voices and Thinx also joined in—and each of them is working internally to figure out more ways to help the environment.

Athletic clothing brand Outdoor Voices, whose slogan is “Doing Things,” closed its stores all day Sept. 20 and held sign-making workshops for anyone who wanted to participate. But the company isn’t stopping there, turning its focus on five internal changes it hopes to change.

For example, Outdoor Voices is set to introduce its first carbon-offset program with the release of its new men’s The Solar Short. Any customer who purchases one will have their entire month’s carbon footprint offset and invested in renewable energy—specifically in the areas where Outdoor Voices products are made. 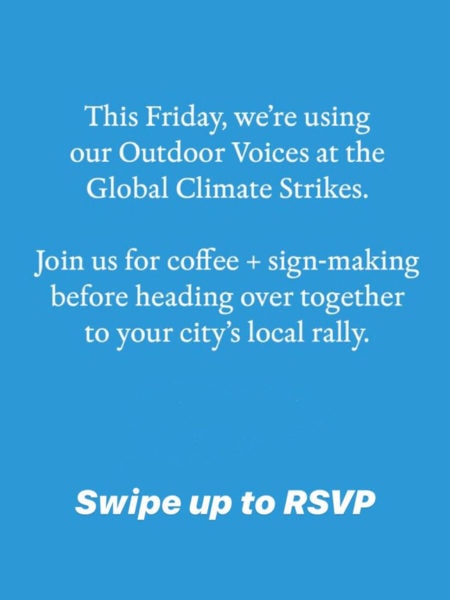 Other initiatives by the brand focus on eliminating plastic from its packaging, starting a take-back product program, and using only Bluesign-certified chemicals, which ensures harmful chemicals are kept out of the manufacturing process.

With the carbon-offset program, Outdoor Voices joins other digitally native brands such as Reformation, Buffy and Aday. Shoe maker Allbirds, a certified B corporation, first announced its carbon-offset program on Earth Day through its Allbirds Carbon Fund. Through the program, the brand taxes itself and offsets its carbon footprint by funding emission-reduction projects.

In Allbirds stores, the brand incorporates sustainability through LED lighting and wood paneling using responsibly harvested sources. The Los Angeles location, for example, also repurposes old products: The service bar at this store is made of old skateboard decks.

“We’re proud of the ways we’ve embodied our environmental mission in our brick-and-mortar retail locations and are continuously updating our stores with new sustainable materials and practices when we find them,” said Joey Zwillinger, cofounder and CEO of Allbirds.

Period product company Thinx, which just recently announced a $25 million Series A, showed its support for the climate strike through social media posts and encouraging members from its office to join the protest march. Externally, the brand redesigned its packaging to make it 100% biodegradable, as well as offering reusable totes for its pop-up events.

And, as a Thinx spokesperson pointed out, the company’s own products help people cut down on waste by eliminating pads and tampons from landfills.

These brands are savvy to consumers increasingly deciding which products to buy based on the company’s values. But, for some brands, joining the climate strike is much bigger than growing its consumer base.

“While we’re sharing our decision to participate in the strike on our social channels and with interested members of the media, we’re not viewing it as a marketing moment for Allbirds,” Zwillinger said. “These strikes are closely aligned with our brand’s ethos and our employees’ passions, and we feel it is our duty to get involved.”