Facebook Kicks Off Its Stories Can Do It Campaign – Adweek

Facebook’s new global cross-platform campaign, which kicked off Monday, is aimed at telling the story of, well, Stories across Instagram, Facebook and Messenger.

The social network said 62% of respondents to a survey it commissioned from Ipsos became more interested in brands or products after seeing them in Stories.

Facebook teamed up with Droga5 on Stories Can Do It, which is aimed at highlighting the impact that the Stories format has on culture, business, commerce and society.

The campaign was timed to debut during Advertising Week New York, and it includes digital media (paid and organic, on- and off-platform), email, trade (print and digital), billboards, subways, other out-of-home, links and live events.

Stories Can Do It also features a new landing page with creative inspiration, success stories, best practices and resources for crafting Stories ads.

Facebook said in an email that more than 1 billion Stories are produced daily across Facebook, Instagram and Messenger, and the Stories Can Do It campaign is aimed at continuing to challenge perceptions about Stories and its platform.

For one of the live events, Facebook will team up with New York-area animal shelter Sean Casey Animal Rescue to use Stories to help place more dogs in homes.

Facebook said Stories featuring dogs will run on the Sean Casey Animal Rescue Instagram account, geotargeted to the New York area and encouraging viewers to swipe up if they are interested in adopting the featured dog.

Sean Casey Animal Rescue will also bring dogs to New York’s Lincoln Center Thursday (Sept. 26) from 2 p.m. to 5 p.m. ET so that Advertising Week New York attendees can meet them and learn how Stories are helping find them homes. 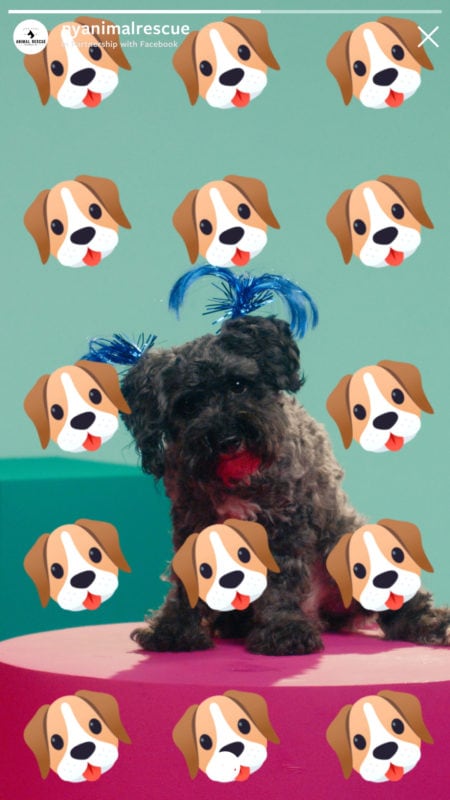 Facebook is also helping up-and-coming comedian Tori Piskin refine her act via Stories. She will share jokes in Instagram Stories and ask viewers for feedback via the poll sticker, and then incorporate that feedback into her Advertising Week New York show Wednesday at 7:30 p.m. ET.

Stories Can Do It kicked off in the U.S. and Canada Monday, and Facebook said it will roll out globally in the coming months.