The social network said in a blog post, “People want to be included in your next big idea, and they are using new innovative ways to do it—fewer words, more GIFs, Facebook Live videos, Reactions, emojis, face filters and stickers. In turn, brands and people are becoming more intertwined, and it’s changing digital advertising from a one-way push communication to an ongoing dialogue powered by creativity.” 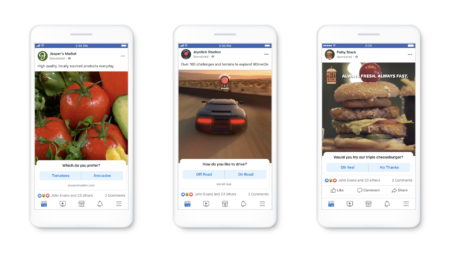 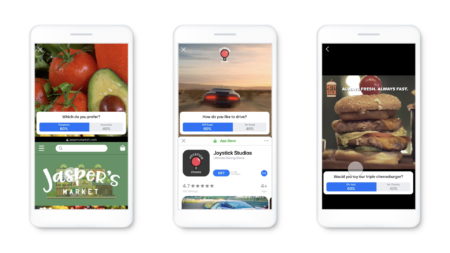 Warner Bros. also used the new ad offering to hike application downloads for its Game of Thrones: Conquest game, and app installs were 87.5% higher when compared with a traditional video ad.

Video poll ads will be available to all brands globally this month.

The social network said its new AR ads will enter an open beta this fall, adding that a recent survey found that 63% of internet users have tried an AR experience created by a brand.

Two cosmetic brands were in the early test group for AR ads.

Facebook said WeMakeUp created AR ads that enabled people to try on different lipstick shades, and when comparing AR ads against non-AR ads, the AR test group saw 53% higher click-through rates and 38% more purchases, as well as a 12.6-point lift in recall and a 7.9-point climb in brand awareness.

And the AR ads Bobbi Brown Cosmetics tested to back its new Luxe Matte Lip Color drew triple the CTRs of the non-AR ads and double the purchases, with people who saw the AR effect engaging with it for an average of 61 seconds.

In August 2018, Facebook rolled out playable ads as a way for video game marketers to enable potential players to try out their games before downloading them.

And Vans teamed up with the Facebook Creative Shop to build a playable game that lets people guide Vans icon Steve Van Doren down a mountain and collect gifts along the way. Facebook said it drove a 4.4-point lift in ad recall and a 2.4-point jump in favorability.

Facebook vice president of global business marketing and chief creative officer Mark D’Arcy said in the blog post, “Advertising needs to work harder than ever to be more relevant and rewarding for the people we’re making it for. Creativity, as always, is the key, and our new polling, AR and playable ads are great examples of more interactive and playful ways to surprise, delight, inform and connect with the audiences and communities we all serve.”

E! senior director of digital marketing Eric Eckstein added, “E! continually seeks deeper ways to connect with viewers. The launch of Facebook poll ads was an exciting opportunity for us to use media in a fun and interactive way ahead of the season-four premiere of Total Bellas. Giving fans an opportunity to engage with the show helped us create meaningful interactions that drove success throughout the season.”