Everything We Know About Disney, Apple, WarnerMedia and NBCUniversal’s New Streaming Services – Adweek

Gone are the days of only needing one or two streaming subscriptions for access to the movies and television shows you want to watch. Major media companies, spurred by changing consumer behavior and the continued growth of services like Netflix and Hulu, are wading into the streaming waters, and the next year will mark a major shift for the streaming television landscape as more than a half-dozen new services enter the space—making things even more crowded and complicated.

Below we’ve rounded up all we know so far about the major streaming services that five major media companies are readying. (There are smaller OTT services on the way as well, including Quibi, the much-hyped mobile-only subscription entertainment service, and BET+, a smaller offering from Viacom’s BET Networks.) We’ll update this story regularly as more information about these major services becomes available. 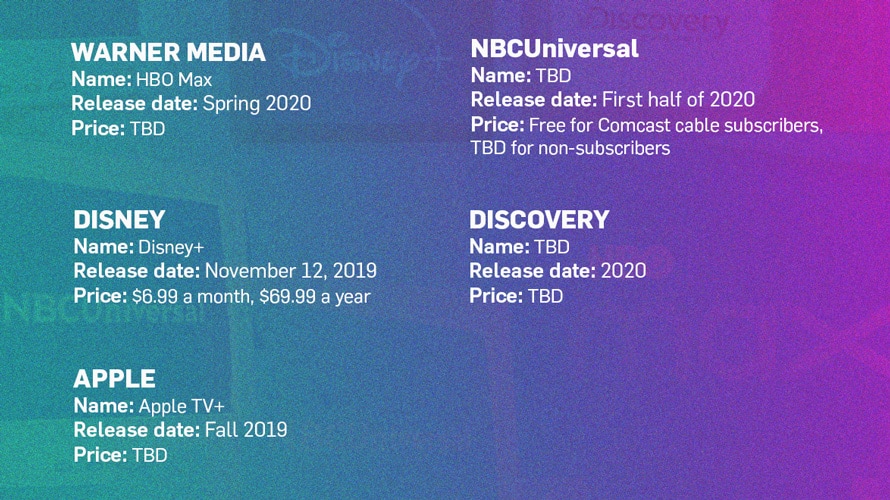 Original programming highlights: The lineup will boast two live-action series and one animated series taking place in the Marvel Universe, including Loki, starring Tom Hiddleston, and The Falcon and The Winter Soldier, starring Anthony Mackie and Sebastian Stan. The service will also have several Star Wars series, including the live-action The Mandalorian, and Pixar offerings like the Monsters Inc. spinoff Monsters at Work. Several original animated films and series from Disney properties like Phineas and Ferb, High School Musical and Lady and the Tramp are also in the works.

Library programming highlights: All 30 seasons of The Simpsons, all Star Wars and Pixar films, a growing number of Disney animated movies, plus more recent Disney films like Captain Marvel and Avengers: Endgame. Disney+ will also include The Sound of Music, The Princess Bride and Malcolm in the Middle.

Original programming highlights: The service will include The Morning Show, a drama series starring Reese Witherspoon, Jennifer Aniston and Steve Carell, about the making of a morning news program, and Amazing Stories, a reboot of the ’80s Steven Spielberg anthology series. Jason Momoa will star in See, a futuristic drama about a world where survivors of a worldwide virus are left blind, and Kumail Nanjiani is working on anthology series Little America, which will focus on immigrants in the U.S. J.J. Abrams, Brie Larson, Damien Chazelle, M. Night Shyamalan and Oprah Winfrey have all been tapped to develop series and documentaries for the service.

Library programming highlights: Apple hasn’t provided any information about library titles coming to the service, and it is unclear if Apple TV+ will feature any library content.

Ad-free tier price: TBD, but reportedly will be more than $14.99 a month

Ad-supported tier price: An ad-supported version will be part of HBO Max’s second iteration, likely in 2021, but details are TBD

Original programming highlights: Love Life, a half-hour romantic comedy anthology from actress and executive producer Anna Kendrick, is coming to the service, as is Dune: The Sisterhood, which takes place in the world from Frank Herbert’s science fiction classic Dune. HBO Max will also have an animated series based on the film Gremlins, along with several original films and television from producer Greg Berlanti (including The Flight Attendant, starring The Big Bang Theory’s Kaley Cuoco), and two original films from Reese Witherspoon. HBO Max will also include HBO original programming.

Library programming highlights: Television shows like Friends (which WarnerMedia snapped up from Netflix), The Fresh Prince of Bel Air and Pretty Little Liars will all be on HBO Max. The service will also be the home for all future Warner Bros.-produced dramas for The CW, including Batwoman and Riverdale spinoff Katy Keene.