A new patent application from Google tells us about how the search engine may use context to find query suggestions before a searcher has completed typing in a full query. Think of Google as a Decision Engine, focused upon bringing searchers more information about interests they may have. After seeing this patent, I’ve been thinking about previous patents I’ve seen from Google that have similarities.

In both of those, the inclusion of entities in a query impacted the suggestions that were returned. This patent takes a slightly different approach, by also looking at context.

We’ve been seeing the word Context spring up in Google patents recently. Context terms from knowledge bases appearing on pages that focus on the same query term with different meanings, and we have also seen pages that are about specific people using a disambiguation approach. While these were recent, I did blog about a paper in 2007, which talks about query context with an author from Yahoo. The paper was Using Query Contexts in Information Retrieval. The abstract from the paper provides a good glimpse into what it covers:

User query is an element that specifies an information need, but it is not the only one. Studies in literature have found many contextual factors that strongly influence the interpretation of a query. Recent studies have tried to consider the user’s interests by creating a user profile. However, a single profile for a user may not be sufficient for a variety of queries of the user. In this study, we propose to use query-specific contexts instead of user-centric ones, including context around query and context within query. The former specifies the environment of a query such as the domain of interest, while the latter refers to context words within the query, which is particularly useful for the selection of relevant term relations. In this paper, both types of context are integrated in an IR model based on language modeling. Our experiments on several TREC collections show that each of the context factors brings significant improvements in retrieval effectiveness.

The Google patent doesn’t take a user-based approach ether, but does look at some user contexts and interests. It sounds like searchers might be offered a chance to select a context cluster before showing query suggestions:

I often look up the inventors of patents to get a sense of what else they may have written, and worked upon. I looked up Jakob D. Uszkoreit in LinkedIn, and his profile doesn’t surprise me. He tells us there of his experience at Google:

Previously I started and led a research team in Google Machine Intelligence, working on large-scale deep learning for natural language understanding, with applications in the Google Assistant and other products.

This passage reminded me of the search results being shown to me by the Google Assistant, which are based upon interests that I have shared with Google over time, and that Google allows me to update from time to time. If the inventor of this patent worked on Google Assistant, that doesn’t surprise me. I haven’t been offered context clusters yet (and wouldn’t know what those might look like if Google did offer them. I suspect if Google does start offering them, I will realize that I have found them at the time they are offered to me.)

Like many patents do, this one tells us what is “innovative” about it. It looks at:

It also tells us that it will calculate probabilities that certain context clusters might be requested by a searcher. So how does Google know what to suggest as context clusters?

The Patent in this patent application is:

What are Context Clusters as Query Suggestions?

The patent tells us that context clusters might be triggered when someone is starting a query on a web browser. I tried it out, starting a search for “movies” and got a number of suggestions that were combinations of queries, or what seem to be context clusters:

The patent says that context clusters would appear before someone began typing, based upon topics and user information such as location. So, if I were at a shopping mall that had a movie theatre, I might see Search suggestions for movies like the ones shown here: 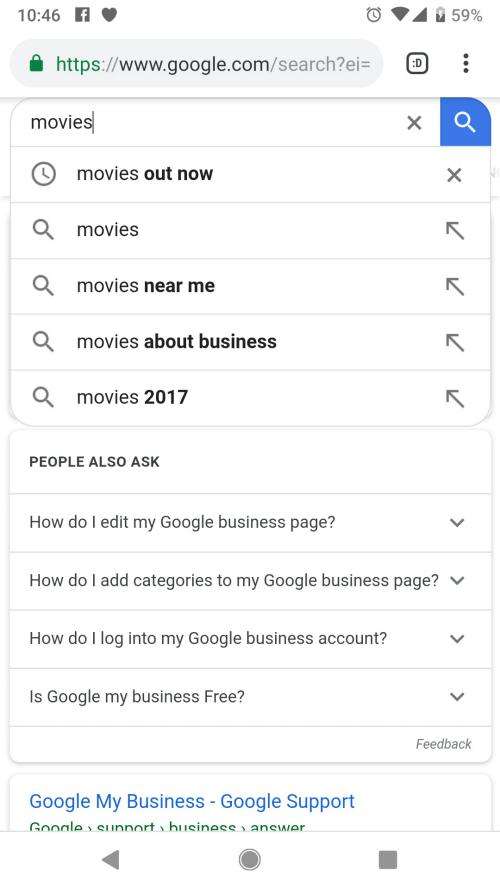 One of those clusters involved “Movies about Business”, which I selected, and it showed me a carousel, and buttons with subcategories to also choose from. This seems to be a context cluster: 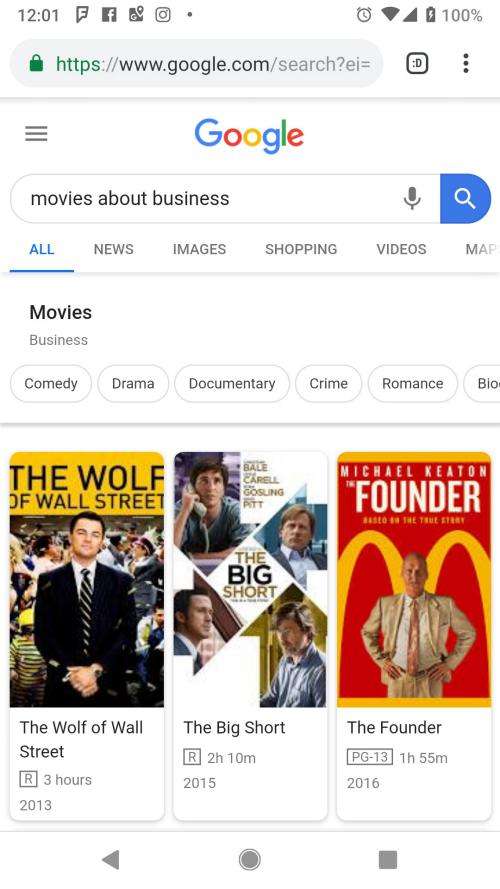 This seems to be a pretty new idea, and may be something that Google would announce as an availble option when it becomes available, if it does become available, much like they did with the Google Assistant. I usually check through the news from my Google Assistant at least once a day. If it starts offering search suggestions based upon things like my location, it could potentially be very interesting.

The patent tells us that context clusters selected to be shown to a searcher might be based upon previous queries from a searcher, and provides the following example:

Further, a user query history may be provided by the user device (or stored in the log data) that includes queries and contexts previously provided by the user, and this information may also factor into the probability that a user may provide a particular query or a query within a particular context cluster. For example, if the user that initiates the user event provides a query for â€œmovie show timesâ€ many Friday afternoons between 4 PM-6 PM, then when the user initiates the user event on a Friday afternoon in the future between these times, the probability associated with the user inputting â€œmovie show timesâ€ may be boosted for that user. Consequentially, based on this example, the corresponding context cluster probability of the context cluster to which the query belongs may likewise be boosted with respect to that user.

It’s not easy to tell whether the examples I provided about movies above are related to this patent or if it is tied more closely to the search results that appear in Google Assistant results. It’s worth reading through and thinking about potential experimental searches to see if they might influence the results that you may see. It is interesting that Google may attempt to anticipate what is suggests to show to us as query suggestions, after showing us search results based upon what it believes are our interests based upon searches that we have performed or interests that we have identified for Google Assistant.

The contex cluster may be related to the location and time that someone accesses the search engine. The patent provides an example of what might be seen by the searcher like this:

I could see running such a search at a shopping mall, to learn more about the location I was at, and what I could find there, from dining places to movies being shown. That sounds like it could be the start of an interesting adventure.