A Patent granted to Google on May 11, 2021, involves performing Natural language processing (“NLP”) tasks such as question answering. It relies on a language model that has been pre-trained using world knowledge.

The patent tells us that recent advances in language-model pre-training have resulted in language models such as Bidirectional Encoder Representations from Transformers (“BERT”), which has been discussed within the past year when it comes to Google. The patent also tells us that using a Text-to-Text Transfer Transformer (“T5”) can capture a large amount of world knowledge, based on massive text corpora on which that language model has been trained.

The patent does point out an issue related to using a language model that accrues more and more knowledge. They noted that storing that knowledge implicitly in the parameters of a neural network can cause the network to increase in size significantly. This could adversely impact system operation.

The patent begins with that information and then moves into a summary, which tells us how the process described in the patent might work.

It tells us that it works with systems and methods for pre-training and fine-tuning neural-network-based language models.

In more detail, it tells us that the technology relates to augmenting language model pre-training and fine-tuning by using a neural-network-based textual knowledge retriever that is trained along with the language model. It states:

During the process of pre-training, the knowledge retriever obtains documents (or portions thereof) from an unlabeled pre-training corpus (e.g., one or more online encyclopedias). The knowledge retriever automatically generates a training example by sampling a passage of text from one of the retrieved documents and randomly masking one or more tokens in the sampled piece of text (e.g., “The [MASK] is the currency of the United Kingdom.”). 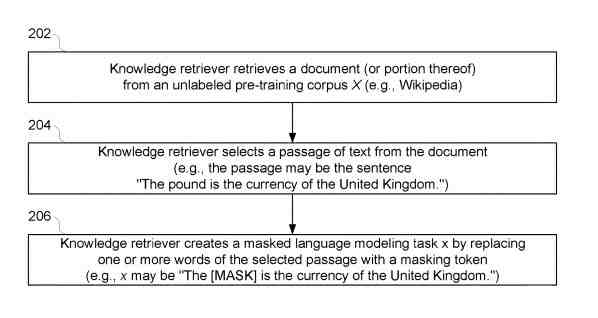 It points out this masking feature specifically:

The knowledge retriever also retrieves additional documents from a knowledge corpus to be used by the language model in predicting the word that should go in each masked token. The language model then models the probabilities of each retrieved document in predicting the masked tokens and uses those probabilities to continually rank and re-rank the documents (or some subset thereof) in terms of their relevance. 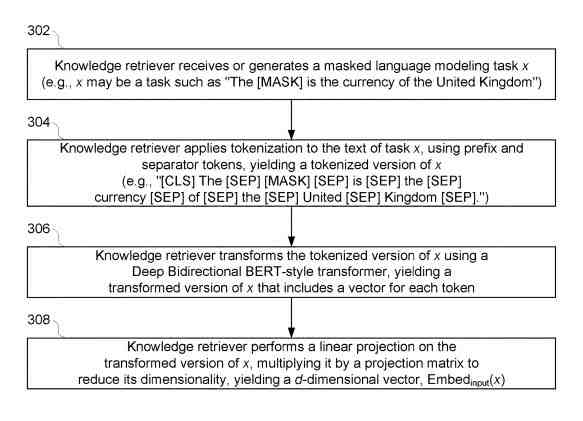 A language model such as BERT can be used for many functions, and the patent points those out as well, telling us specifically about BERT question-answering:

The knowledge retriever and language model are next fine-tuned using a set of different tasks. For example, the knowledge retriever may be fine-tuned using open-domain question and answering (“open-QA”) tasks, in which the language model must try to predict answers to a set of direct questions (e.g., What is the capital of California?). During this fine-tuning stage, the knowledge retriever uses its learned relevance rankings to retrieve helpful documents for the language model to answer each question. The framework of the present technology provides models that can intelligently retrieve helpful information from a large unlabeled corpus, rather than requiring all potentially relevant information to be stored implicitly in the parameters of the neural network. This framework may thus reduce the storage space and complexity of the neural network and also enable the model to more effectively handle new tasks that may be different than those on which it was pre-trained. 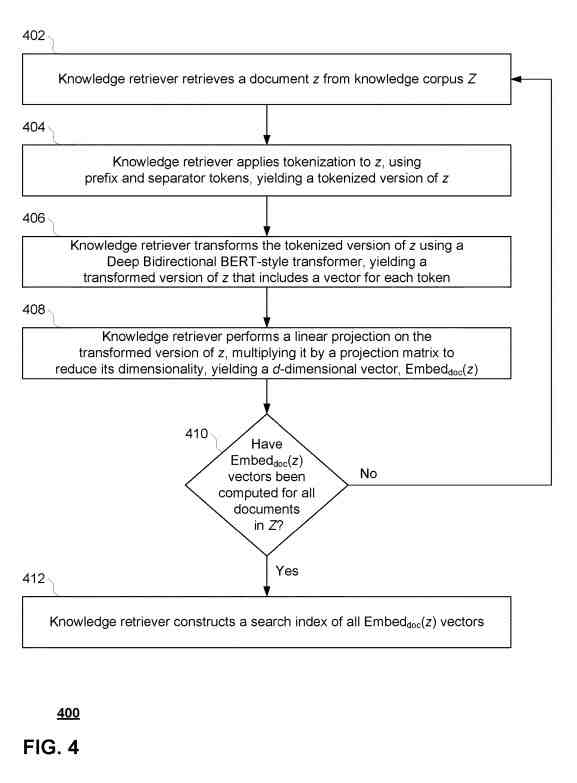 The patent describes training a language model by: 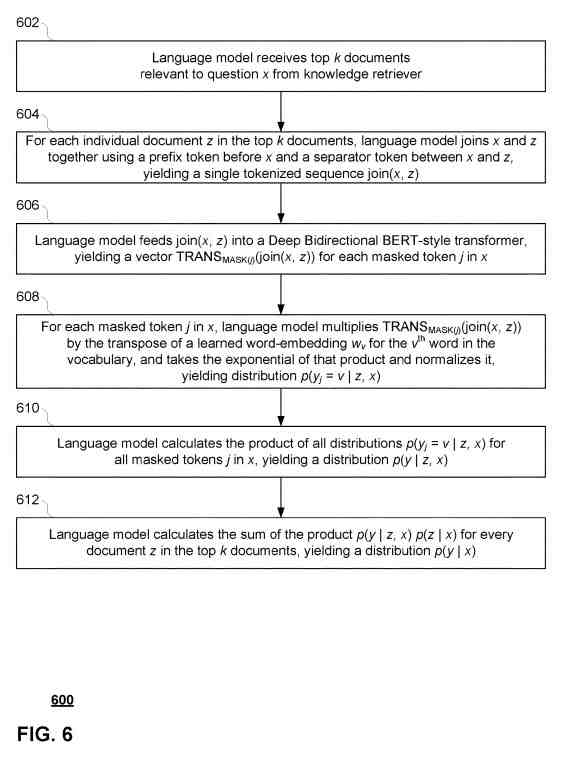 When BERT came out, it was intended to help with around 11 NLP tasks, including question answering. I provided a look at the summary of the patent and some of the images that go with that summary, but the final process is much more detailed. This statement from the patent reminded me of a previous acquisition by Google of Wavii (With Wavii, Did Google Acquire the Future of Web Search?):

In some aspects, the system’s one or more processors are further configured to receive a query task, the query task comprising an open-domain question and answering task; generate a query input vector by applying the first learned embedding function to the query task, the first learned embedding function including one or more parameters modified as a result of the modifying; generate a query relevance score for each given document of the knowledge corpus based on the query input vector, and the document vector for the given document; and retrieve the third plurality of documents from the knowledge corpus based on the query relevance score of each document in the third plurality of documents.

The patent can be found at:

Systems and methods for pre-training and fine-tuning of neural-network-based language models are disclosed. A neural-network-based textual knowledge retriever is trained along with the language model. In some examples, the knowledge retriever obtains documents from an unlabeled pre-training corpus, generates its own training tasks, and learns to retrieve documents relevant to those tasks. In some examples, the knowledge retriever is further refined using supervised open-QA questions. The framework of the present technology provides models that can intelligently retrieve helpful information from a large unlabeled corpus, rather than requiring all potentially relevant information to be stored implicitly in the parameters of the neural network. This framework may thus reduce the storage space and complexity of the neural network and also enable the model to more effectively handle new tasks that may be different than those on which it was pre-trained.

More Resources on BERT and on BERT question-answering

There is a paper about BERT which is worth reading to see how it is being used: BERT: Pre-training of Deep Bidirectional Transformers for Language Understanding

One of the authors of the BERT paper was also one of the inventors of this patent, and there looks like some interesting reading on his homepage as well: Ming-Wei Chang’s Homepage

Visiting this patent can also be worth doing because while I have presented a summary of how Google may use BERT question-answering, the patent provides a much more detailed look at how the search engine may use the technology behind it.

Some aspects of that include:

For example, the pre-training corpus may be an online encyclopedia such as Wikipedia, and the retrieved document may be a complete HTML page for a given entry, a selected section, or sections of the page (e.g., title, body, tables), a single paragraph or sentence, etc. In step 204, the knowledge retriever selects a passage of text from the document to be masked. For example, the knowledge retriever may select a single sentence from the document, such as “The pound is the currency of the United Kingdom.” Finally, in step 206, the knowledge retriever creates a masked language modeling task x by replacing one or more words of the selected passage with a masking token (e.g., “[MASK]” or any other suitable token). For example, continuing with the same example from step 204, the knowledge retriever may mask “pound” within the selected passage, such that masked language modeling task x becomes “The [MASK] is the currency of the United Kingdom.”