Snack food brand Frito-Lay is putting a new spin on the catchy tune “My Favorite Things” in a spot that imagines what the holidays would be like if Rodgers and Hammerstein wrote a song about cheese puffs and actress Anna Kendrick invited us to her holiday get-together.

It marks the first-ever holiday ad for Frito-Lay.

However, instead of the favorite things on Sound of Music star Julie Andrews’ list, Frito-Lay features its own brands in lyrics like, “Bright yellow Lay’s bags and noses frostbitten,” “Eating Doritos on big comfy couches,” and “This Smartfood Popcorn all tied up with strings.”

And, of course, the brand integrations don’t stop there: keep your eyes peeled for a Lay’s-themed holiday sweater and a gingerbread house covered in Cheetos, Doritos and Lay’s.

The over-the-top creative—which also includes men with Christmas lights woven through their beards—appealed to Kendrick, who said she liked being able to “lean into the excess of the holidays and food and just having so much fun with it.”

“It wasn’t earnest; it was just like really campy and winking at the audience and felt like, ‘We’re all here to have a good time,’” Kendrick told Adweek. “With so many things, what drew me to it was the sense of humor and I think their whole brand has a sense of humor about it.”

“The holidays are such a more-is-more time. It makes making content around it more fun and you can do it with a bit more abandon.”

Frito-Lay’s internal creative team is responsible for the concept and production, including the new lyrics. Chris Bellinger, vice president of creative and digital at Frito-Lay parent PepsiCo, said the genesis for the spot came in thinking about the holidays, when consumers want to be with their favorite people, doing their favorite things, after which point Bellinger recalled, “The song queued into our heads: ‘Doritos and Cheetos and duh, duh, duh, duh, duh’ … [which felt] … so natural.”

And, Bellinger said, the brand included both of those snacks because they are iconic brands, but also because their names worked in the lyrics: “They have that kind of -etos at the end, which made it easier to write the song and then Smartfood got in there because of tying it on trees … and the fun, iconic, middle part, ‘popcorn all tied up with strings,’ was the perfect lyric cadence.” 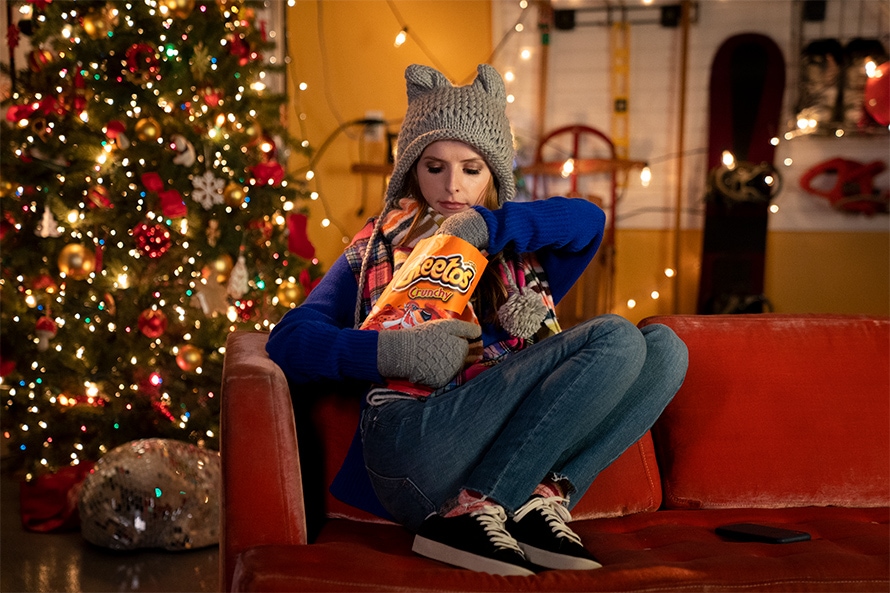 Kendrick, who is known for singing roles in movies like Pitch Perfect and Trolls, was their first choice for this “very tongue-in-cheek, wink-and-a-nod” spot. In the behind-the-scenes video (see below), Kendricks revealed she was told not to eat the prop food in a snack-laden winter wonderland.

“She hit that personality tone perfectly. She has that perfect stage presence; she can sing, dance and act and she feels like someone who eats snacks,” Bellinger said.

“My Favorite Things” didn’t actually start out as a holiday song. It first appeared in the 1959 Rodgers and Hammerstein musical The Sound of Music. However, Billboard reports, Andrews, who starred in the 1965 film, sang the song during a TV holiday special and it was added to a holiday album in 1964 because the movie was coming out the following spring and needed a hit song to spur ticket sales. They adjusted the lyrics to include sleigh bells and a holiday. A classic was born.

Kendrick, who emphatically said her favorite holiday is Christmas (and stars as Santa’s daughter in the recently released Disney+ movie, Noelle), also said her other favorite things include outdoor markets with arts and crafts like those you find in London’s South Bank, along with mulled wine, cheese and chocolate. She said holiday content, no matter what it is, offers more room for whimsy and magic.