Agencies Show That When It Comes to Buying Media, It’s Not What You’ve Got—It’s How You Use It – Adweek

This year’s winners found clever ways to resonate with the coveted youth market (we’re talking about you, Oh Henry! and Visible), channel a massively popular TV series for the greater good (Droga5), inspire organic participation from celebrities (Initiative) and so much more. Presenting the 2019 Media Plan of the Year winners, who proved time and again that it’s not what you’ve got—it’s how you use it.

As they say, it all started with a tweet.

Last year, Nike enlisted Colin Kaepernick, the former San Francisco 49ers quarterback who made headlines in 2016 for kneeling during the national anthem to protest racial injustice in the U.S., to help the brand celebrate the 30th anniversary of its iconic “Just Do It” tagline.

Just days before the 2018 NFL season kicked off, Kaepernick tweeted a striking black-and-white photo of his face paired with Nike’s famous slogan and the following copy: “Believe in something. Even if it means sacrificing everything.”

It was bound to be controversial, as Kaepernick at the time was in the midst of a lawsuit against the NFL, alleging its owners of colluding to keep him out of the league because of his protests. Within mere hours, his tweet had set off a national firestorm, with supporters defending him and protesters threatening to destroy and burn all Nike apparel. 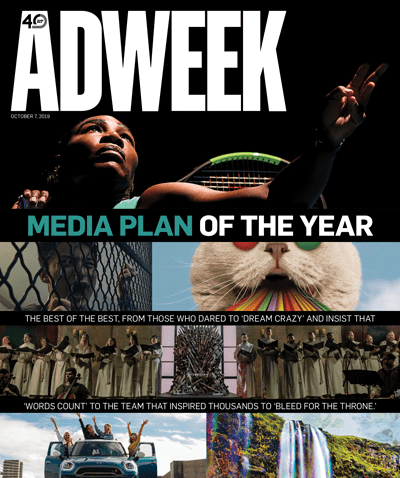 Other Nike athletes, including Serena Williams, got in on the action too with their own social posts. The social buzz served as a precursor to a massive out-of-home campaign that began blanketing cities across the country the next day. Seen on buildings, in subway stations and more, each larger-than-life ad beautifully and simply showcased athletes who’ve overcome insurmountable obstacles.

But the campaign didn’t stop there. As the Philadelphia Eagles and Atlanta Falcons opened the season, a spot featuring Kaepernick, as well as a host of other Nike athletes, aired during the game. “Dream Crazy” drove home the message that Nike had been drumming up all along, which is that even the unlikeliest of dreams can become a reality with enough determination.

By airing the spot during the NFL’s first regular game of the season, Nike made its stance on Kaepernick’s fallout with the league incredibly clear. It paid off, as Nike’s stock hit a record high in the days that followed, and the campaign garnered $163 million in earned media, according to Wieden + Kennedy.

“W+K has always been grounded in creative and media working together. How and where a brand shows up in media can turbocharge the creative potency of an idea and how it spreads through culture,” says Daniel Sheniak, global communications planning director at Wieden + Kennedy.

This year, Nike and Wieden + Kennedy, along with Publicis Sapient, once again leveraged a pop culture event to continue its “Dream Crazy” messaging with a follow-up, “Dream Crazier.” Airing during this year’s Academy Awards—and just weeks before International Women’s Day—Nike’s powerful spot called out the many double standards that women face in sports.

Narrated by Serena Williams, the ad encouraged female athletes to realize their full potential even in the face of adversity. “Dream Crazier” was cleverly sandwiched between a speech that Williams gave onstage at the Oscars about pursuing dreams and the awards show’s Best Actress category.

“There are foundational things we’re always focused on—finding the truth, understanding the passion of an audience, evaluating the right cultural moment and identifying surprising ways to deliver that will reverberate across the world,” notes Reme DeBisschop, North America media director at Wieden + Kennedy. “This is something in every brief.” —Minda Smiley