Behind influencer marketing’s glossy exterior, there’s a lot of sweat, tears and time spent. For some buyers—particularly those on smaller campaigns with smaller budgets—ad tech is the answer.

Recent months have seen a boom in influencer platforms, an emerging tech that promises to do everything from weed out the perfect microinfluencer for your campaign to scaling that campaign across the web to keeping tabs on engagement. And thanks to the burgeoning popularity of the microinfluencer crowd, more marketers are programmatically plugging in than ever before.

“Today, a lot of advertisers are looking for the seamless experience of what it’s like to buy an ad on Facebook and Google,” explained Angelo Damiano, CEO of programmatic platform PowerSpike. What they don’t want to do is reach out to talent, negotiate contracts and manage the day-to-day of those relationships, he said.

Damiano’s platform, which is built for esports influencers on Twitch, takes care of the extra workload programmatically. To cut down on contract time, his company built out a proprietary algorithm that prescribes a set budget per influencer, depending on the results and reach they’d get for a particular brand. That way, a brand can have a clear comparison of which influencer will get the best bang for its buck, completely cutting out most of the long-winded negotiation process. 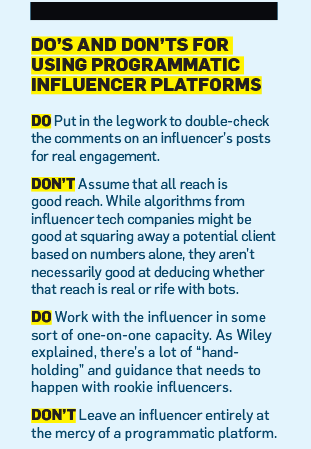 It can cut down on other time-sucks, too.

“If we’re recruiting for a program, we might need 20 influencers and get 200 applicants,” said Danielle Wiley, CEO of influencer agency Sway Group. Rather than sorting through each one, Wiley said that her agency programmatically pulls data about the reach and engagement rates of the would-be influencers. She can also check to make sure they’re a good fit in other ways, like whether they’re the right age to reach their demographic.

That said, not every influencer is cut out for these kinds of campaigns, explained Antoine Forest, CEO of programmatic platform Stargazer, which works with roughly 2 million influencers.

“If you think of influencer marketing like celebrity marketing, then you cannot put a value on a particular influencer’s post,” he said. Microinfluencers, meanwhile, are more amenable to make the shift from paying for content to paying for quantifiable performance.

While Forest declined to share much about rates for the roughly 5 million content creators on his platform, a recent survey from influencer marketing hub Tribe found that 97% of these small-scale influencers charge less than $500 per sponsored Instagram post while 84% charge $250 or less.

Regardless of the metric a particular brand is searching for, authenticity is paramount.

“Our M.O. a lot of the time is to give guidelines for a creator [that] they should do shout-outs or giveaways, but how they ultimately do it is really up to them,” Damiano said. Even at scale, he added, “the key is not to hand out a script and tell a bunch of influencers to do that. The audience sees right through it, and it ends up doing a lot more harm than good.”

When influencers lend their stamp of approval to a particular product, brands can reap big rewards. A 2019 study from Japanese ecommerce giant Rakuten found that roughly three-fourths of global consumers would spend up to $629 on an influencer-approved purchase, with the lion’s share (42%) saying they’d spend up to $100 on one product.

Brand-centric programmatic platform Spaceback allows marketers to upload an influencer’s public Instagram posts and receive an ad tag in return, turning each of these posts into stand-alone ads for their own programmatic campaigns, complete with likes and comments that update in real time. Brands that previously spent weeks trying to recreate a particular Instagram post can now take their ads to market in a matter of minutes, according to Spaceback CEO Casey Saran.

Authenticity aside, platforms like Saran’s have another added bonus: the power to programmatically pull the hard numbers behind a campaign.

“Back in the olden days of Instagram, if you wanted to know, say, how many people saw an Instagram story, you’d need the influencer to screenshot how many people saw it,” Wiley explained. “Now we’re able to get all sorts of data automatically, which really helps take some time off of our hands.”